The current Ely Golf course has a unique history. It was literally and figuratively built on the backs of volunteers. It was originally established as a six-hole course dating back to the 1930’s when the mining division of United States Steel was active in the area. In the late 1940’s, it became a rough and tumble nine-hole course. Even today some of the old course is still in play. When you putt on No. 9 green and it feels like it is two separate greens, it really is as of the green is part of an original green. By the 1980’s, the course was in dire need of a total reconstruction.

A dedicated group of volunteers stuck together to create the current course. It wasn’t easy. Eight years of design work and continuing financial woes plagued the all-volunteer group even before a shovel hit the soil. It wasn’t until the summer of 1989 when the owner of the local excavating company watched a dedicated group of volunteers try to carve two new holes out of the woods with pick axes and one small bulldozer that the real ground-level work began. He offered the golf club a price it couldn’t refuse and a pay-back period for as long as it would take to get enough money to pay him. He brought in his heavy earth-moving equipment and during that summer, his crew carved out the current nine-hole course. A summer of serious deluge and drought curtailed a quick-build of the course. It took thousands of volunteer hours to brush and level the land, pick up rocks, and many reseedings after the numerous heavy rainfalls to get the course started. It took eleven years of work and worry to create what now proudly presents itself as the Gem of Ely.

The process continues today as modifications are made to improve playing and aesthetic conditions of the course. So come play the course and give thanks to the volunteers and financial donors who had the vision and the tenacity to create this beautiful place in the north woods; Ely Golf Club, a non-profit corporation.

CALL 218.365.5932
T-Times-recommended!
We encourage calls to check for weather related delays or closures. 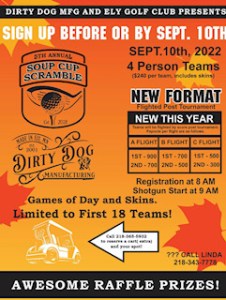